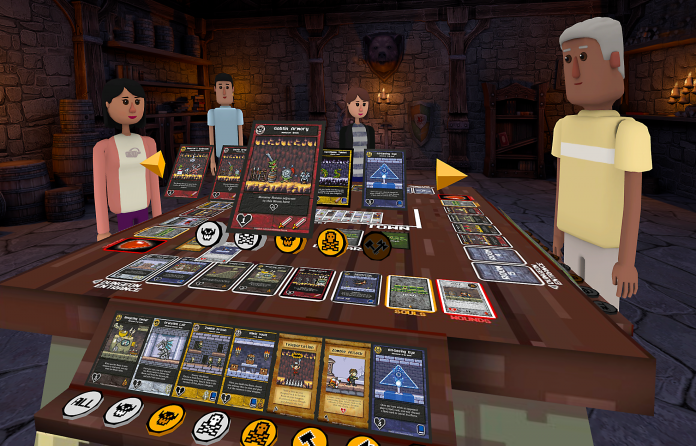 Those that follow VRFocus will know that, earlier this month, virtual reality (VR) social platform AltspaceVR finally released on the Gear VR mobile-based head-mounted display (HMD). The software allows players to meet up online, enjoy some multiplayer games together and share content through YouTube, Twitch and Periscope among others. Other developers have also been creating content for the platform through the first AltspaceVR software development kit (SDK). One such developer is Brotherwise Games, which is bringing its popular card-based game, Boss Monster, to the platform.

As with other experiences in AltspaceVR, this addition will allow users to play Boss Monster online within VR. Throughout today and tomorrow, creators of the game Chris and Johnny O’Neal will be offering ‘How to Play’ sessions through the software, teaching others the ins and outs of Boss Monster. The first sessions are at 10:00 and 18:00 PST today, while there’s an 11:00 session tomorrow. At 18:00 tomorrow the creators will also take part in a ‘Meet the Creators’ session, talking about the project.

“This is exciting  for AltspaceVR users as they  gain access to an engaging new game, while Boss Monster fans now are able to join together in VR to play in a cool new venue,” said Eric Romo, founder and CEO of AltspaceVR. “Brotherwise Games represents an important segment of the VR market—independent developers and entrepreneurs—and our SDK makes it easy for them to enter VR.”

Stay tuned to VRFocus for the latest on AltspaceVR.