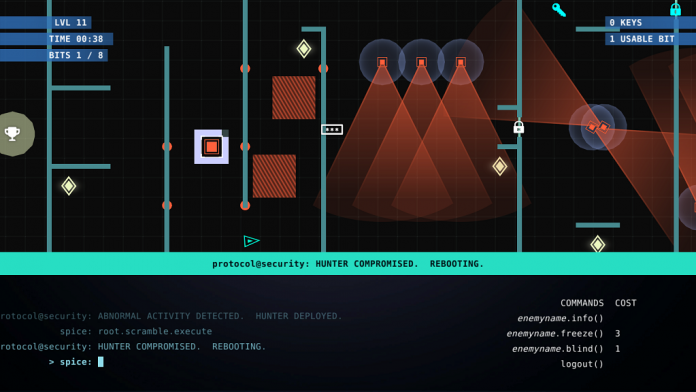 Black Hat Cooperative the award-winning videogame from Team Future launched on Oculus Rift through its Oculus Home platform last month. The studio at the same time ran a Steam Greenlight campaign which proved successful, and now the title has arrived with support for HTC Vive.

Black Hat Cooperative is a co-op and multiplayer title that pits players and an ally against robot agents that are hunting both of you. Player one is in virtual reality (VR), sneaking past agents, collecting treasure, keys, and passwords. While player two is on a standard monitor viewing everything on a map helping to guide your partner whilst being able to hack security and enemies.

Players have 12 levels crawling with robot agents to work through, each with their own abilities. There’s the grunt, captain, king, or the hunter, who can sniff out the players trail and chase them down. Added into the mix are environment challenges like laser traps and sound-detecting alarms keeping players on their toes.

Originally started as a weekend game jam project during the 2014 Global Game Jam, the developers then ran a successful Kickstarter crowd-funding campaign creating Team Future and bringing the project to a wider audience.

The videogame retails for £6.99 GBP on Steam.

For all the latest releases on Steam keep reading VRFocus.