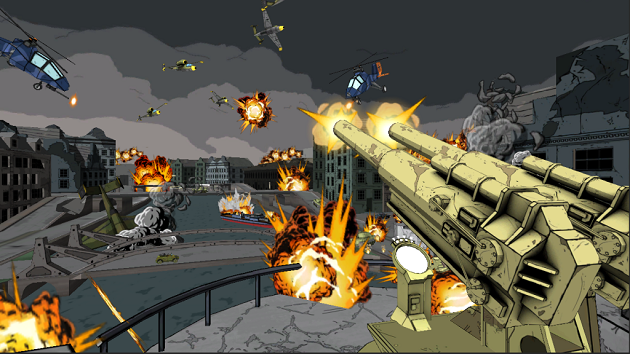 Earlier in the year UK-based team Climax Studios released its first ever virtual reality (VR) title, Bandit Six, onto the Innovator Edition of the Gear VR mobile head-mounted display (HMD) from Samsung and Oculus VR. The first-person, turret-based shooter has since proved to be one of the most popular titles on the device. Today, Climax Studios is following up that launch with a sequel in Bandit Six: Salvo, which is now available for the Gear VR again.

Like its predecessor, Bandit Six: Salvo is a turret-based experience set in the Second World War. Unlike the original, however, players don’t take control of the guns on board a bomber. Instead, they operate a number of grounded weapons that overlook a range of locations, using different positions and firing types to take down a variety of different enemy types. The title boasts a colourful art style and is controlled using the Gear VR’s head-tracking and the touchpad mounted on the side.

The title’s release comes just before the launch of the consumer version of the Gear VR, which has been promised for this month. In fact, pre-orders for the new device have been listed on Best Buy this week and point towards a 20th November launch.

VRFocus will continue to follow Bandit Six: Salvo and all other releases for the Gear VR, reporting back with the latest updates on them.