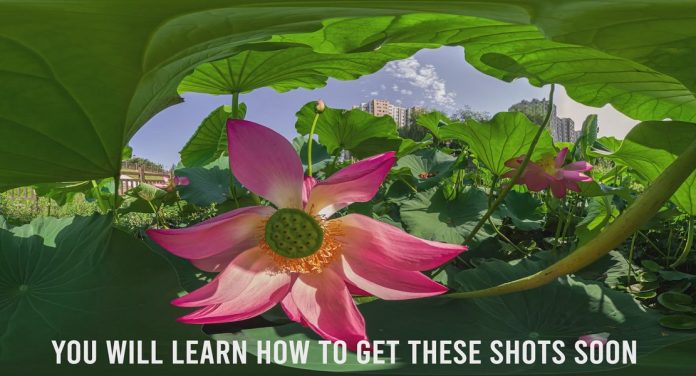 
There are thousands upon thousands of lotus photos. How do you take one that stands out? Award-winning photographer Yuqing Guo captured stunning lotus photos by shooting from impossible viewpoints with a 360 camera. Here’s how he did it:

360 cameras like the Qoocam 8K are very compact and moreover, they can capture photos without the need to aim.  As a result, they can capture unique perspectives that would be difficult, if not impossible, for traditional cameras.

One limitation of consumer and prosumer 360 cameras is their small sensors.  The Qoocam 8K has among the largest sensors for consumer 360 cameras with two 1.7-inch size sensors but its sensors are dwarfed by sensors used in DSLR and mirrorless cameras.  Nonetheless it is possible to get excellent image quality from the Qoocam 8K through its DNG8 mode.

DNG8 is an image stacking feature of the Qoocam 8K.  It will take a burst of eight Raw DNG photos then stack them to reduce noise and increase dynamic range.  But surely the pole here would be moving between shots?  Indeed, but the Qoocam 8K uses a special stacking algorithm that can be used even with moving objects, and in the latest firmware version of Qoocam 8K, the stacking can be done in-camera, with batch processing, as shown by Yuqing.

The post Award-winning photographer reveals how to capture IMPOSSIBLE viewpoints with a 360 camera appeared first on 360 Rumors.