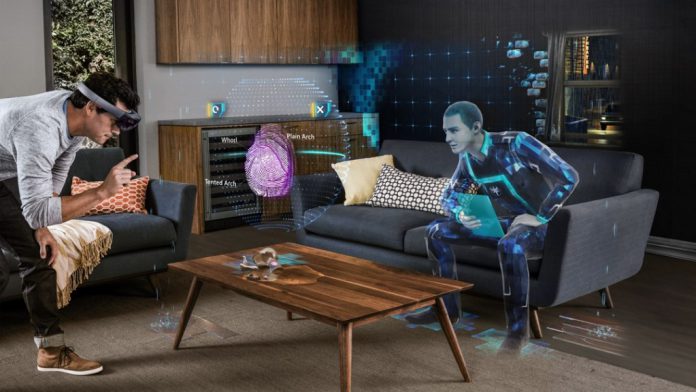 On 30th March Microsoft began shipping its mixed reality (MR) head-mounted display (HMD) HoloLens to developers in the US and Canada. During its development one studio that’s been mentioned a number of times to be working on several projects was French indie developer Asobo Studios. Three titles that were in production were Fragments, Young Conker and HoloTour. Now the studio has announced all three are available for the device.

In Fragments players become the detective in a high-tech crime thriller. You interact with holographic characters turning your room into a crime scene. “Thanks to HoloLens’ room scan feature, we have been able to hide some clues everywhere, even behind the player’s furniture!” says David Dedeine, CCO and co-founder of the studio. “Being the witness of the transformation of his own room while exploring the memories of a crime victim is quite an amazing and unique experience.”

While Young Conker takes Rare’s character and brings him into MR. Levels change and adapt to your environment, so you can play the same level in different rooms for a unique experience every time. “Young Conker brings the classical platformer experience to a whole new level.” affirms Dedeine. “Just imagine that Conker will recognize the matters to adapt his behaviour: rebound on your couch, drive enemies hidden by a chair completely nuts… The secret of infinite replay value? Move one object and it’s a whole new level!”

Moving away from videogames is HoloTour allows viewers to explore various parts of the world, from Rome to Machu Picchu. “HoloTour represents a whole new challenge, especially regarding the creation process,” said Sebastian Wloch, CEO and co-founder of Asobo. “Indeed, with the rise of this new technology, we realized that we were setting the standards of the future in terms of virtual tourism. This app is the perfect complement to our two other creations and demonstrate Asobo’s ability to transpose its know-how, video games development, in other domains in order to address both companies and public audience.”

With HoloLens currently only available to developers and hitting a price tag of $3000 USD these experiences won’t be seen by many. VRFocus will keep you updated on any further developments for HoloLens in the future.