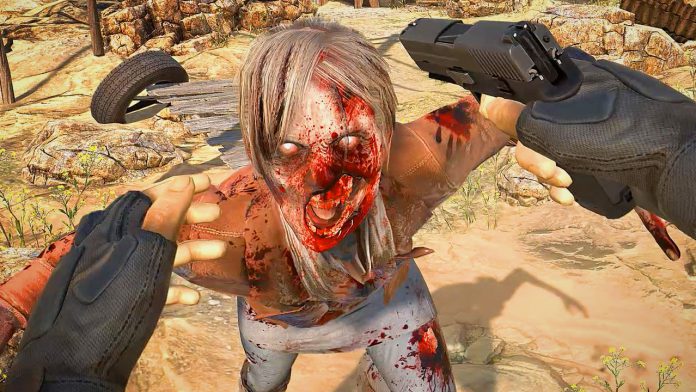 Back in May 2015 World of Diving developer Vertigo Games announced a partnership with Jaywalkers Interactive, the team behind PlayStation Vita’s Kick and Fennick, to produce a new virtual reality (VR) first-person shooter (FPS) named Arizona Sunshine. The zombie shooter was initially only announced for the HTC Vive head-mounted display (HMD), making full use of the SteamVR system and its position tracked controllers. Recently, however, it’s also been confirmed that the title is on its way to the Oculus Rift and Oculus Touch too.

Jason Rubin, Oculus VR’s Head of Worldwide Studios, confirmed as much in a recent interview with Game Informer for its latest issue, which is centred around VR. Talking about types of FPS experiences coming to the Oculus Rift, Rubin noted: “The second iteration, we had Touch controllers shooting at things. You could think of Arizona Sunshine, which is coming out on both of our platforms, where you’re standing in place and zombies are coming at you, but now guns are in your hands. That was a second generation first-person shooter.”

Rubin’s reference to ‘both’ our platforms likely refers to both the Oculus Rift and Oculus Touch if not the HTC Vive. It’s unlikely that the Oculus VR figurehead was referring to the company’s other VR HMD platform, Gear VR, given the mobile-based nature of the tech and its lack of support for position-tracked controllers.

As Rubin suggested, Arizona Sunshine lets players take part in a zombie apocalypse, using motion controllers to realistically handle weapons, blowing away hordes of undead that are hoping to eat you. The experience is designed to allow players either to hop in for short sessions or keep on playing over the course of several hours. It was originally expected to launch in late 2015 though, given the delay of the HTC Vive back to April 2016, don’t expect it to arrive anytime soon.

VRFocus will continue to follow Arizona Sunshine closely, reporting back with the latest updates on the title.