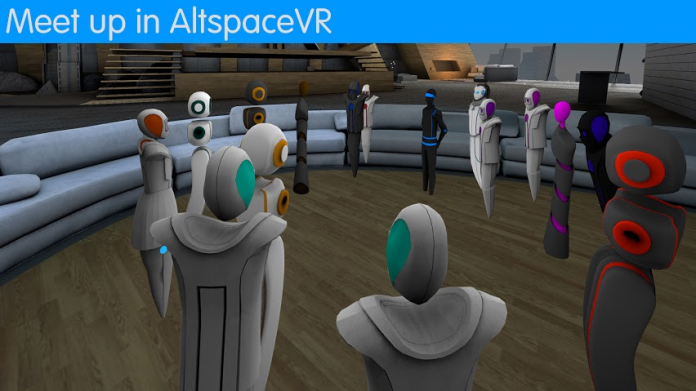 All the way back in September 2015 VRFocus reported that AltspaceVR, one of the first cross-platform communication services for virtual reality (VR) head-mounted displays (HMDs), would be coming to Samsung and Oculus VR’s Gear VR mobile-based device. Today, AltspaceVR has finally launched on the kit, arriving in the Oculus Concepts section of the online store, where Early Access and experimental content is made available for free.

AltpsaceVR allows users to put on their HMD and meet up with others online. Here they can enjoy multiplayer games together and even visiting events or share videos from YouTube, Twitch and Periscope. A web browser is also included. Crucially, the software is also heading to the Oculus Rift and HTC Vive, meaning people will be able to connect across a range of HMDs. Take note, however, that the app is not currently compatible with the original version of the Gear VR, which runs with the Galaxy Note 4 smartphone. That said, it does support all of Samsung’s 2015 handsets.

“Our focus at AltspaceVR is creating the most natural and fulfilling communication experience possible online, and we’re thrilled to bring it to Gear VR,” said AltspaceVR Founder & CEO Eric Romo. “AltspaceVR on Gear VR brings nearly all the features of our PC experience, but with the ease of use of mobile.”

In the past AltpsaceVR has released its own software development kit (SDK) to allow developers to create their own content that will be compatible across both PC and smartphone. Keep reading VRFocus for the latest updates on the project.