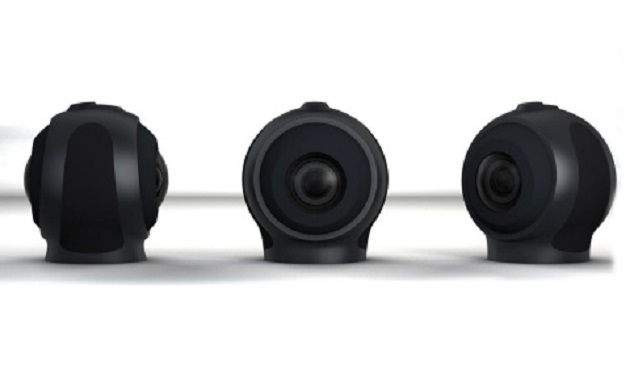 The ALLie Go portable 360×360 action video camera is a high-resolution portable unit that can stream to devices over Wi-Fi. The camera mounts to the body or equipment of the user for use in multiple settings, from action orientated sports to entertainment. ALLie Go incorporates two microphones, a built-in speaker, storage for recording and a rechargeable battery.

It’s IC Real Tech’s first portable camera and with the accompanying app will allow users to share recorded content to Facebook and live stream to both the ALLie and Oculus Rift VR headsets. Owners of the ALLie Go will also get access to the ALLie Go Channel, featuring the latest videos uploaded by users. The ALLie Go Camera will have a MSRP of $599 USD and shipping is expected around mid-2016.

To compliment the ALLie Go Camera IC Real Tech is releasing the ALLie VR HMD, a smartphone enabled device that will accommodate screen sizes ranging from 3.5 to 5.7-inches. Using the ALLie VR app videos from ALLie cameras, 3D movies and videogames can be viewed. The headset will retail for $59 USD and should be available this month.

The final product being unveiled is a rival to Google Cardboard. An entry level unit in the VR headset market the ALLie Cardboard VR is already available to buy from Brookstone retailers in the US for $24.99 USD.

VRFocus will continue to bring you the latest details on IC Real Tech’s ALLie branded VR range as further announcements are made.

The post ALLie Go 360 Camera and VR Headset to be Launched at CES 2016 appeared first on VRFocus.