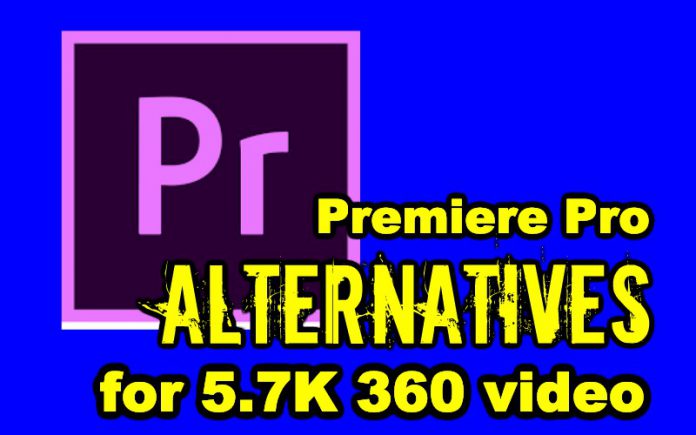 
So you got a shiny new 5.7K 360 camera but now how do you edit it?  Do you have to use Adobe Premiere Pro?  If you’re looking for a full-featured 360 video editors with 5.7K support, there are more affordable options.

Adobe Premiere is admittedly the best 360 video editor I’ve tried (even though it’s not that good). But it is extremely expensive, requiring a subscription of $20.99 per month just for Premiere itself ($251.88 per year), or $52.99 per month for Creative Cloud (with a temporary discount of $39.99 per month through 3/1/19) for software the vast majority of which you will never use anyway.   Do they make such huge updates with each version to justify the ongoing cost?  No, they just force you to “update” the file format so that it will be incompatible with previous versions (such as Premiere Pro CS6, which can be purchased without a subscription).

Adobe reps argue that most people upgrade their software every year.  But the obvious difference is that if you stop paying their subscription, you lose the software, whereas a software that you buy is yours for good.  What kind of idiots does Adobe think we are, trying to sell us that BS argument…?

The truth is that Premiere isn’t even that good.  It crashes very often, drops many frames in previews, and has a cumbersome and contrived interface.  It is also missing critical features such as overcapture editing, for which it relies on a GoPro plugin.  If it weren’t for GoPro, Premiere wouldn’t even be usable for 360 overcapture editing.

The only reason Premiere is so dominant is that it just happens to be the beneficiary of network effects insofar as it is recognized as “the” standard for video editing.  But that’s no excuse to charge exorbitant subscription prices, especially since the vast majority of Premiere users are creatives who aren’t exactly making oodles of money.   Even Microsoft doesn’t force users to pay for subscription for Windows or Office that most people use literally every day.

Unfortunately, there’s no way this administration is ever going to investigate Adobe for anticompetitive tactics (see, e.g. tying).  So here are some alternatives to Premiere.

For overcapture editing, you can use Insta360 Studio for One X, which works for other 360 cameras as well and supports videos up to 5.7K as long as the video is in 2:1 equirectangular format. Then you can edit the overcapture the same way you would any other non-360 video. Here is a tutorial: