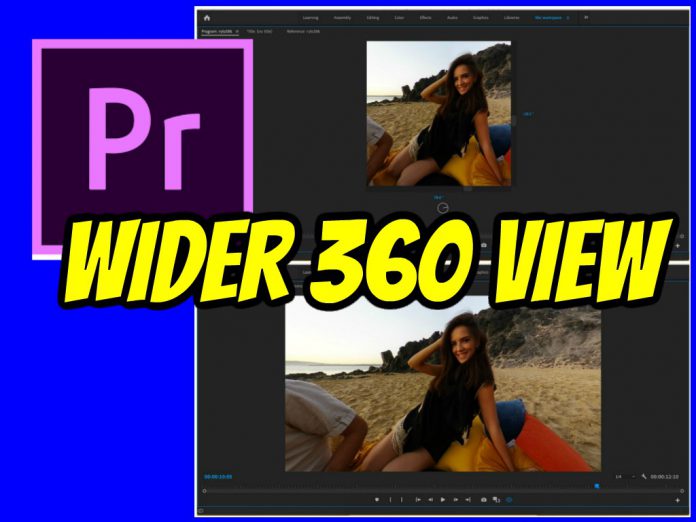 
Adobe Premiere Pro is touted as being the best 360 video editor, but it has many quirks.  One of those oddities is that the default 360 view is a tiny square with useless dials that squeeze the view to an even smaller one.  Here’s how to get a wider, uncluttered 360 view.

Step 1: Add the VR Video button. To get a 360 view of an equirectangular photo or video in Premiere, you need to add a new button for Toggle VR Video Display if you haven’t already done so:

Step 2: Disable controls.  The default 360 view is a square, which was designed to be similar to the view on a VR headset.  But if you intend your 360 video to be seen on a phone or LCD screen, then you’ll want a 16:9 view instead.  To get a wider view that is closer to what your audience will see, first disable the controls around the 360 view.  Click on the wrench, select VR Video, and uncheck “Controls.”  You can still change the view by simply dragging the mouse on the screen, which is much more intuitive than sliders or dials.

Step 3: Switch to the wider view.  To change the view to 16:9, change the viewing angle.  Click on the wrench, then VR Video, then Settings.  In the dialogue box for VR Video Settings, choose Horizontal view of 180 degrees and vertical view of 100 degrees:

That’s all there is to it!  If you want to turn your 360 video into an exciting overcapture 360 video, check out this tutorial.  BTW if Premiere is too expensive, check out these alternatives.

The post Adobe Premiere Pro 360 video editing: How to get a wider view appeared first on 360 Rumors.