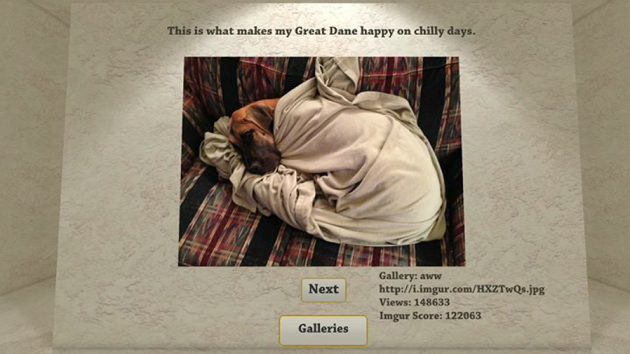 The Samung Gear VR mobile head-mounted display (HMD) can do a lot more than just play videogames. Developers are designing all sorts of software across a wide expanse of genres as they get to grips with virtual reality technology and its potential. Released this week for the headset is VR Image Browser (VRIB), a piece of software that will allow users to view images from online sites Reddit and Imgur directly in VR.

The sites are full of pictures uploaded by users from across the world, encompassing all sorts of topics, from cute animals and Cosplay to science and beyond. VRIB gives users access to live feeds everyday, with the latest images to be added to the services. The imagery is laid out in an art gallery style setting, with a giant sized picture to view and additional information from the respective site shown below. The software doesn’t need a gamepad but support is offered to enable a more immersive experience. Users will be able to move around the space and get up closer to the selected pictures.

As a special introductory offer to celebrate the launch of the Samsung Gear VR HMD, VRIB is being sold at $2.99 USD for early adopters. It’s unclear how long this offer will be in place, so if you’re a fan of Imgur or Reddit and wish to peruse the sites images in VR then you might need to be quick.

VRFocus will continue to follow all the latest releases for Gear VR as more are announced.