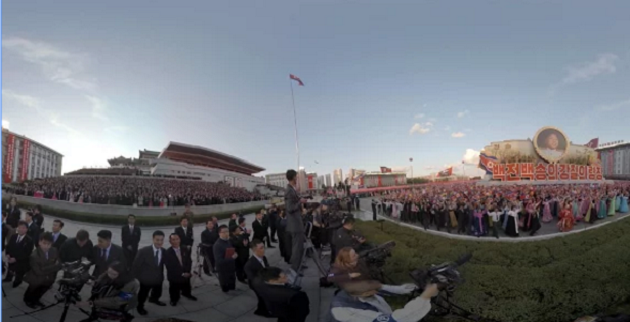 While the secretive state of North Korea does let journalists into the country, where they go and who they talk to is tightly controlled. That goes even more so for recording video. But ABC News’ Bob Woodruff not only got to record a rare trip to the country, he got to take a 360 degree video camera supplied by cinematic virtual reality (VR) company Jaunt.

Now the companies have released the VR experience, Inside North Korea VR on Android and iOS. The trip coincided with North Koreas 70th anniversary of its Worker’s Party which included a giant military parade. Users with compatible smartphone devices can use A Google Cardboard head-mounted display (HMD) or similar device to fully immersive themselves in the capital city of Pyongyang as Woodruff gives a rare insight into the country. For those without a suitable device the 360 degree video can be viewed through a browser at ABCNews.com/VR.

This isn’t the first time Jaunt and ABC News have collaborated. Back in September they released Inside Syria VR, where viewers are transported to the city of Damascus. Here they will follow ABC News’ Alexander Marquardt has he charts archaeologist’s struggles to protect some of the precious antiquities in the city that face the threat of war.

VRFocus will continue to bring you any further announcements from Jaunt and ABC News as details are revealed.