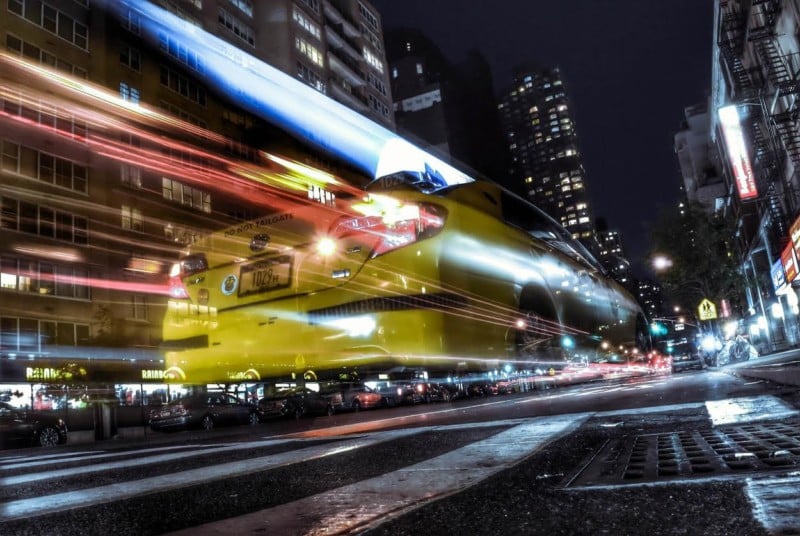 I don’t think I’ll ever get over the gratifying feeling of capturing a 30-second exposure of electrified traffic beams streaking between a wall of skyscrapers. I rarely find myself shooting under daylight anymore, as the darkness has much more to offer me (maybe it’s just the relative lack of tourists).

When shooting Gotham in the darkness, you never know what you’re gonna get. Place the tripod mounted camera down, set your exposure time, hit the shutter, —
Okay, it’s a bit more complicated than that — and watch the magic fly through your frame.

Enter my story of the floating cab shot. Here’s what went down:

I went out to shoot around the Upper East Side with my $100 Nikon S1. I decided to place my camera (mounted to a mini tabletop tripod) down on the ground near a traffic light to capture some light trails. I set my exposure to 8 seconds and hit the 2-second-delayed shutter. About about 1 second into the exposure, a cab pulled up, literally right in front of my camera, to drop a passenger off. Me being frustrated, thinking that the cab ruined the shot (I didn’t want another plain cab pic, I have plenty of those) I picked my camera up, with about a half second remaining in the exposure, so I could relocate and move onto my next shot.

I then looked at my screen and discovered my coolest photo mishap thus far. The cab had turned into a ghost. A floating ghost at that.

Why did this happen? How? Why is the cab… floating? Did lifting the camera towards the end of the shot also lift the cab off the road? One theory is that the floating effect is due to the fact that the cab body reflected a lot of light into my camera while the black tires and rims didn’t reflect enough light to show up in the photo. Another is that as the cab slowed to a stop within the frame, another car pulled up directly behind it, illuminating it and ultimately having the same effect as a camera flash, which also could’ve contributed to the floating effect.

Can this ever be recreated , or was it just a freak occurrence? This shot has left me with so many questions, and no matter how many times I try, I cannot seem to reproduce this effect. This is yet another example for me of how photography is fascinating, especially when it yields unexpected results.

About the author: Jeremy Horowitz is a hobbyist photographer based in New York City who mainly shoots with Micro Four Thirds cameras. The opinions expressed in this article are solely those of the author. You can find more of his work on Instagram.