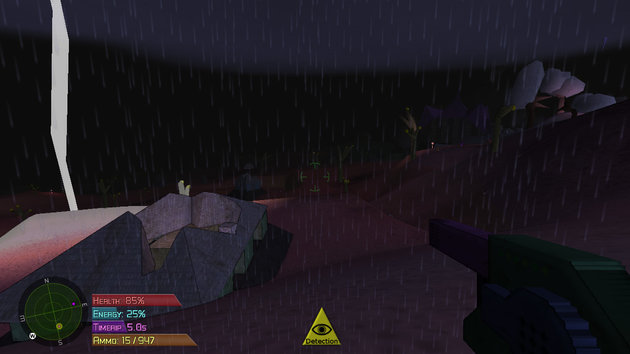 Indie developer Phr00t’s Software is no stranger to virtual reality (VR) tech. Back in 2015 the studio passed a Steam Greenlight campaign for what has to be one of the more infamous VR-supported titles, Spermination, which supported the Oculus Rift head-mounted display (HMD). The developer is best known, however, for its series of strange and surreal futuristic role-playing games (RPGs), the latest of which is 5089: The Action RPG. In fact, the newest addition to the series is said to be coming ‘very soon’ with support for both the Oculus Rift and HTC Vive.

Following on from 3089 and 4089, 5089: The Action RPG returns to the fictional planet of Xax in which experimental robots wage war, spreading chaos across the globe as the planet’s ‘Overlord’ has gone missing. Players will be able to engage in a number of gameplay styles from stealth to action as they explore a randomly generated planet, with co-op play also included so that friends can player together. The title even includes a ‘reworked’ version of 3089, though it’s not yet clear if this too will support VR tech.

The Steam page for 5089: The Action RPG simply notes that the title is ‘coming soon’, and that people that own 3089 will get the sequel at a discounted price. As for VR support, the developer plans to make full use of tracked controllers such as Oculus Touch and the Room Scale user-tracking that’s primarily seen in the HTC Vive. It will also be able to play the title in VR sitting with a controller, though. Other new content includes enemy types, improved visuals, a new dialog system and much more.

For any further updates on 5089: The Action RPG and all other VR supported titles, keep reading VRFocus.