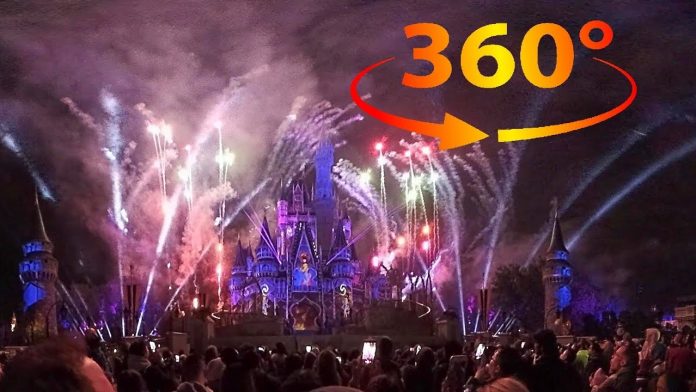 
Happy Independence Day to our readers in the U.S.!  Fireworks are beautiful, and 360 cameras are uniquely able to capture not just the fireworks but also the crowd’s reaction.  But in order to get good 360 photos or 360 videos of fireworks, you need to be aware of these techniques.  Here are 5 tips for taking a 360 photo or 360 video of fireworks.

Some 360 cameras are better than others for shooting videos in low light.  As of July 2019, two of the best ones for low light video are the Insta360 One X (reviewed here) and GoPro Fusion (reviewed here), and between the two of those, only the One X has manual exposure for both photos and videos.  For photos, an excellent choice is the Ricoh Theta Z1 (reviewed here), which has large 1-inch sensors, which perform better in low light.

Here’s a video by 360 Rumors contributor Viajero360 where he was close enough to the fireworks at DisneyWorld, so the fireworks look great.  This video was shot with the Garmin Virb 360.

Because you’ll be shooting with slow shutter speeds, you’ll need to avoid motion blur from camera shake.  360 camera stabilization will not negate motion blur.  Instead, you need a very stable tripod (not just a monopod with tripod legs).  Don’t worry about the tripod legs showing up in the photo or video since the action will be in the sky anyway, so the added stability is worth the tradeoff.

For videos, consumer 360 cameras vary in terms of their ISO and shutter speed.  As a starting point, try using exposure compensation to set the exposure so that the streetlights have discernible color (e.g. yellow) and aren’t simply blown out (white).  The shadows will appear dark but don’t worry about those — the focus is on the fireworks after all.  For Insta360 One X, use Shutter: Auto instead of Shutter: Fast, or use manual exposure to use ISO 800 and shutter speed of 1/30.

For photos, many photographers love to use long exposures for fireworks.  However, for most consumer cameras, the aperture is fixed at around f/2 or f/2.8, and there are no ND filters for consumer 360 cameras, which means you can’t use long exposures. For photos, set ISO to 100, and the shutter speed to around 1/2 second (if your camera’s aperture is f/2) or 1 second (if you’re at f/2.8).   If your camera has a lower ISO, or if you are using the Theta Z1 with adjustable aperture, you can try a slower shutter speed.

Consider that in some cases, a 360 camera may not always be the best tool for taking a photo or video of fireworks.  First of all, the fireworks may be too distant for the fisheye lenses of your 360 camera, in which case, the fireworks will appear tiny in your photo or video.  Second, you have less control of the exposure compared to a traditional camera where you can control the aperture.

I’ll update this post with the photos and videos I get tomorrow.  Meanwhile, check out this amazing aerial 360 video by the wizards at AirPano: