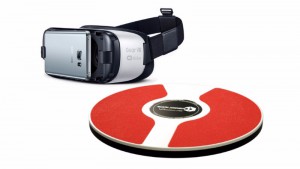 There might be an increasing number of virtual reality (VR) headsets coming to the market but there are even more ways being developed to control them, from Virtuix’s omni-directional treadmill, to VRGO’s chair that makes us feel like Borrowers perched atop a joystick. 3DRudder is a controller that concentrates solely on your feet, something that’s surprisingly still quite unusual in the VR peripheral market, and the company has revealed at the Electronic Entertainment Expo (E3) in Los Angeles that the device is now compatible with the Samsung Gear VR headset.

To be used only when seated, the 3DRudder allows users to control their movements in a VR environment with just their feet, leaving their hands free to interact. The controller aims to give players a greater sense of control over their movements in videogames with automatic and point-and-click movement mechanics, which can cause nausea, by providing what they say is an intuitive and natural method of control that doesn’t require learning how to use a gamepad.

According to CEO of 3DRudder, Stanislas Chesnais, “The 3DRudder controller coupled to the Samsung Gear VR is a simple, rapid and efficient solution for exploration games or applications such as virtual tourism or virtual real estate, without having to own a full-blown VR installation.”

The 3DRudder controller can already be used with some existing Gear VR games such as VR Karts: Sprint and applications like The Night Cafe, where movement is controlled either with a gamepad or with the touch control pad on the right side of the Gear VR.

The controller is available to purchase on the 3DRudder website for $179.

For more of the latest news from E3 2016, keep reading VRFocus.