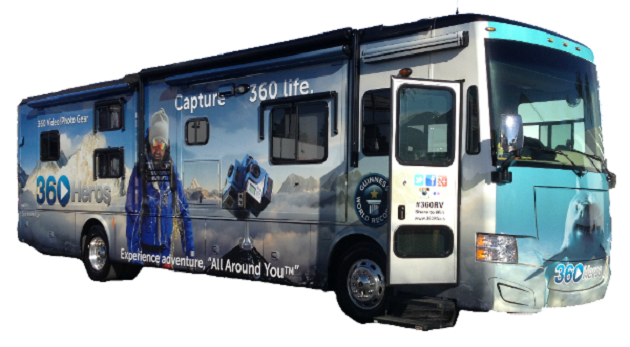 With the Consumer Electronics Show (CES) 2016 just around the corner virtual reality (VR) technology companies are revealing snippets of information of what to expect from the Las Vegas-based event. French company Scale-1 Portal has announced a portable VR projector, while Fibrum will be showcasing a global VR platform. 360Heros the company behind 360-degree camera rigs for GoPro cameras, has also revealed it will be at the show, and kicking off a tour of the US in a custom coach as well.

The 360Heros Tour bus first unveiled back in November 2014, is a 40-foot long coach designed and wrapped by CEO Michael Kintner. It has visited a number of events over the past year, and will continue to do the same in 2016, beginning with CES 2016.

The company be featured in the VR pavilion along with Oculus VR, HomidoVR and many more. It’ll be showcasing its latest 360-degree video rigs as well as unveiling new automated and modular 360 video products that it hopes to impress attendees with.

After CES 2016, 360Heros will be heading to the Virtual Reality Los Angeles (VRLA) Winter Expo, returning to the LA Convention Center and Petree Hall, being held on 23rd, January 2016.

VRFocus will continue to follow the latest news from 360Heros, reporting back with any further announcements.

The post 360Heros RV Tour Kicking off at CES 2016 appeared first on VRFocus.