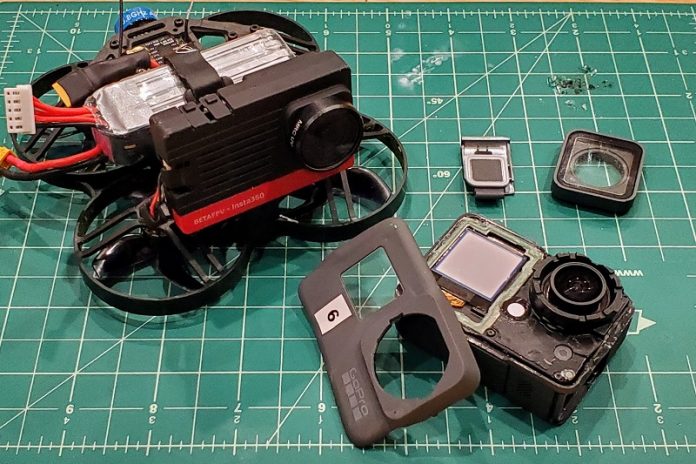 
If you want a naked GoPro for cinematic FPV but don’t want to risk damaging your GoPro or dealing with the hassle of soldering, check out the Insta360 SMO ($239), a 4K 60fps naked GoPro alternative that has similar advantages without any of its disadvantages.

In the past couple of years, cinematic FPV pilots have been using naked GoPros — GoPros stripped down to their bare essentials to get the lightest weight possible — to mount them on very small quads and capture amazing FPV videos that could not be done on conventional drones.  Here is the video that started it all, shot by godfather of cinewhoops, Robert McIntosh, who flew a 2-inch quad with a naked GoPro through a ring.

Although naked GoPros create amazing possibilities, they pose several challenges: you have to take a GoPro apart carefully and hope that you don’t ruin it in the process.  You also need to solder a power cable to your quad’s flight controller to provide power to the GoPro (because you’ll remove its battery as well).  And with exposed parts, naked GoPros are also a bit fragile.

But what if you could have all the advantages of a naked GoPro without its disadvantages?  The Insta360 SMO is a naked GoPro alternative that shoots in stabilized 4K 60fps and weighs only 30 grams.  It is based on the Insta360 One R 4K mod, which is similar to a GoPro.

Unlike a naked GoPro, you can buy the Insta360 SMO ready to use – no assembly required.  It also has a lightweight cover that protects it from dust and makes it more durable than a naked GoPro.  As with naked GoPros, the SMO has no battery and is instead powered by your quad.  However, there are some quads that come with a power cable preinstalled to use the Insta360 SMO – so that means that in some drones, no soldering needed.  As of March 2021, those include the 2.5-inch Beta95X V3, 4-inch Flywoo Explorer, and Flywoo Hexplorer hexacopter.  I’ve also been told by a Flywoo reprentative that the next version of the Flywoo Chasers cinewhoop will also be preinstalled with an Insta360 SMO power cable (For other quads, you will need to solder the included power cable to the VBAT+ and GND of your flight controller.)

You’ll also need a mount for the Insta360 SMO.  I used this 3D printed part (you can upload the STL file to 3D printing services such as Sculpteo).  Note that the model does not have holes for the screws.  I used the small screws that were included with the Insta360 SMO to ‘drill’ holes into the 3D printed mount, then screwed them onto the Beta85X V2 camera mount.

Here is a short sample from the Insta360 SMO on the Beta85X v2.  (Please note that I’m just an FPV beginner.)

The SMO includes a removable UV filter for protection and an ND16 filter, and includes two back covers — one with a mount for the Beta95X V3, and one without a mount, which can be used with a strap or other mount.

One issue with the SMO is that I’m having some trouble connecting it to the Insta360 app, which keeps prompting me to confirm the connection on the SMO screen.  The SMO doesn’t have a screen, so I can’t do that, although I was somehow able to connect to the app twice.  I’m checking with Insta360 about how to fix this.

I will be shooting more videos with the Insta360 SMO on other quads.  Stay tuned.