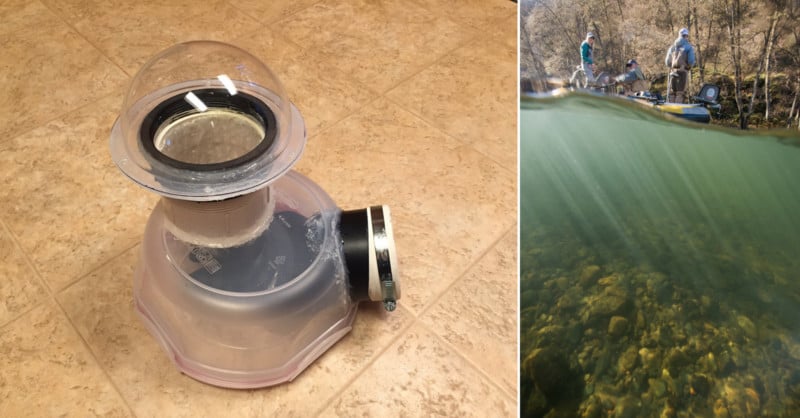 If you’ve done research into underwater housing, you’ll know how expensive they can be. In some instances, they cost more than the camera. Certainly, when you pay the premium price you’re also purchasing assurance, functionality, size, etc. However, rebel that I am, I didn’t want to pay the premium, so I built my own.

They make cheaper underwater bags which I’ve used before, but the reason that didn’t meet my needs is I specifically wanted a big-dome port. Since they don’t sell those in any version except expensive housing cases, I knew my only option was to DIM (Do It Myself).

This post shows you how I built it, and some sample images that have since come from it on two different shoots. I’ve been quite pleased considering it cost me less that $50 and has had no issues with water leaks.

First, the materials I used. Run to a few local stores and pick up supplies (images below). Such supplies include: Once the tools are assembled, figure out what holding position is going to be most comfortable and starting cutting holes. I used a sharpie and box cuter for my holes. I didn’t want to use any kind of jig saw due to how flimsy the plastic would be with that. Also, I know that I’m a meticulous and detailed person, so I knew my cuts wouldn’t be sloppy.

Make these holes as perfect, snug, and precise as possible. The goal of the silicone isn’t to fill large gaps, but to seal and hold a tight fit. Also, I wouldn’t suggest siliconing pieces in place yet. I waited to have everything together and tested before securing it.

You can also see here how the glove works. Insert into the 3″ piping and fold over the end. I rubbed a thin layer of silicone under the folded section before putting the clamp on and tightening.

Also, as you insert the pieces, be testing with the camera to see how far pieces should be inserted to be comfortable and in proper position. If the 3″ piece was too far in, it would squish my hand while holding the camera, but if it’s too far out, I wouldn’t be able to hold the camera properly. These adjustments are why I wouldn’t silicone anything yet. 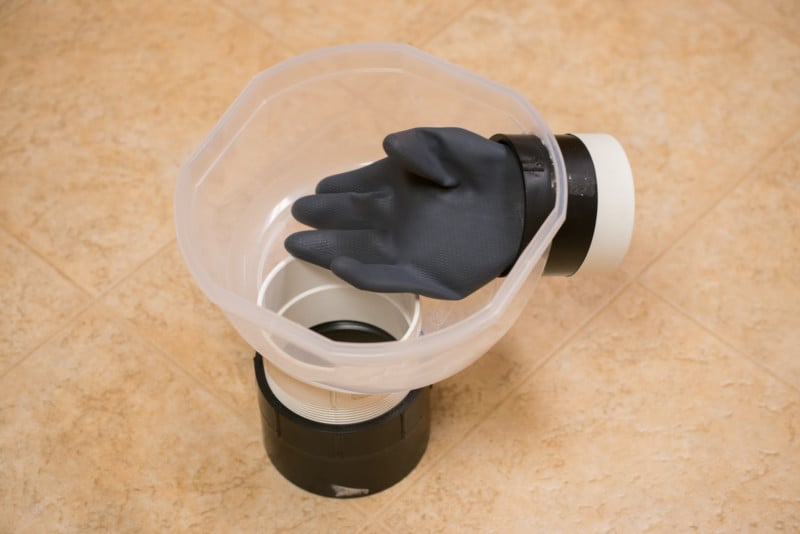 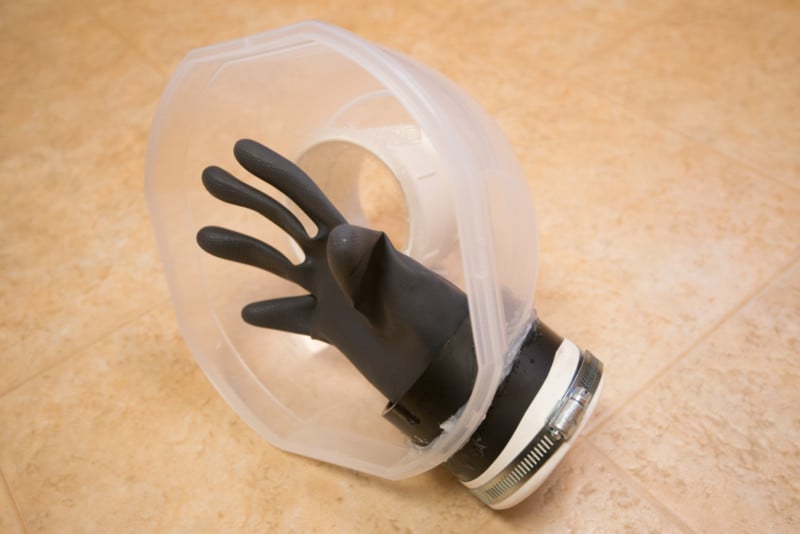 Once the dome port arrived two days later, I took the extra lid and cut two circumferences from it—one for the 6″ dome port and one to go over the 4″ NBS. 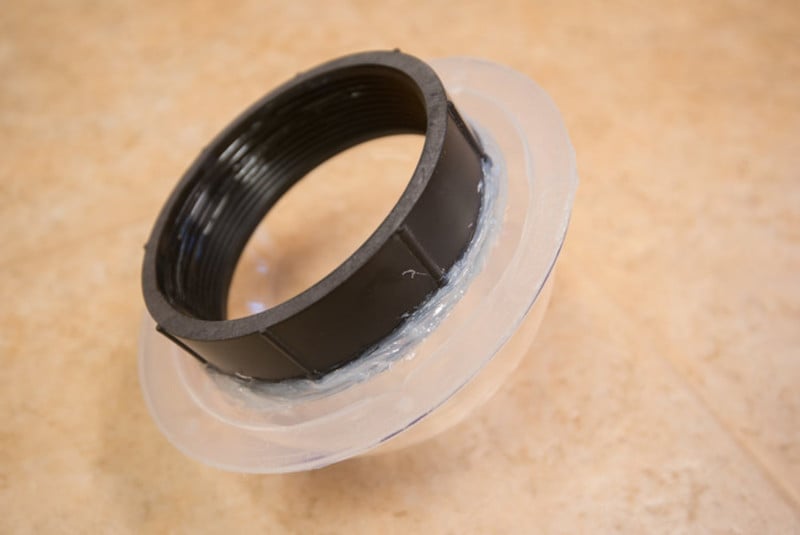 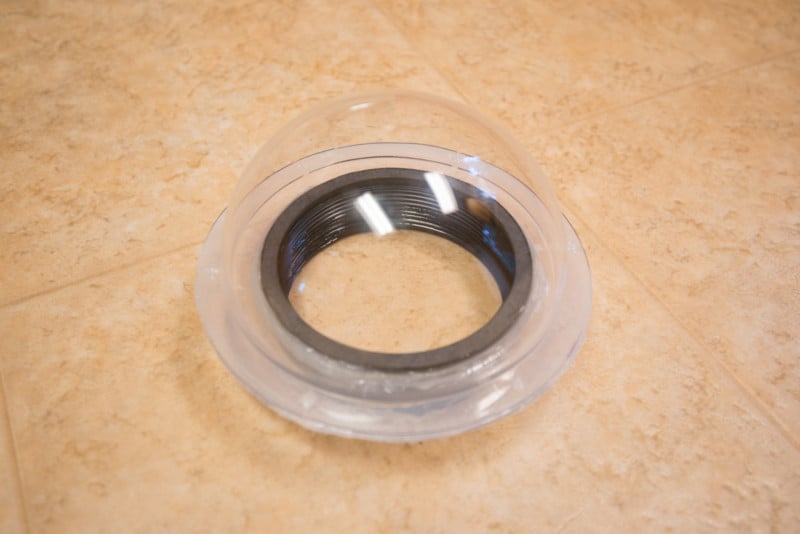 Once pieces are ready to assemble and have been tested, we can begin siliconing.

One thing I did to ensure a better adhesion is I scraped and made a rough surface for the silicone to grip—that way it’s not adhering to a perfectly smooth surface. You could used a rough file for this or just a blade like I did. 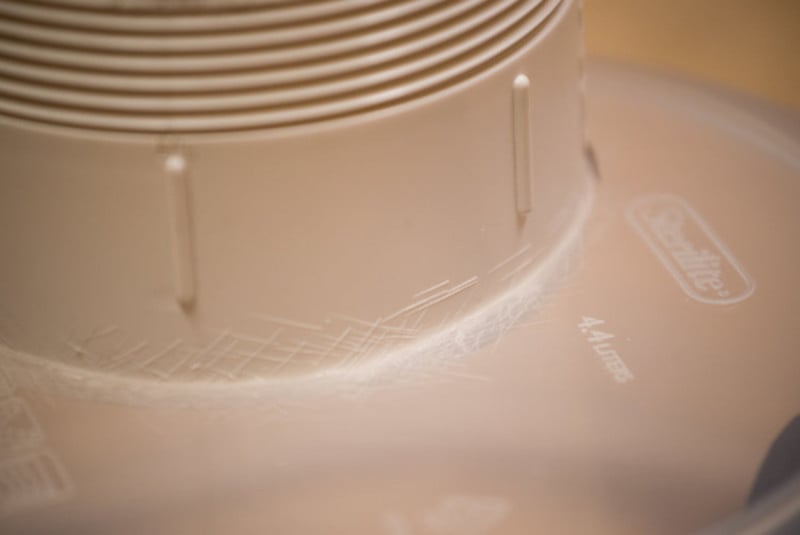 Now add silicone to all joints, ensure a tight seal, and let dry. I gave a full 2 days of drying just to be sure before testing.

After testing in the sink and tub to ensure it was safe to put my camera in, I used it for some actually shoots. Although I may not be able to access all buttons at any moment and it is big and clunky, it was still almost $1,950 cheaper and has produced some neat images thus far.

The way I function it inside the case is by putting it on manual focus, a larger aperture for good depth of field since above and below the water will be different focal planes, and I have used it in both Manual and Aperture priority. I turn on the live view and can trigger the shutter whenever I please. 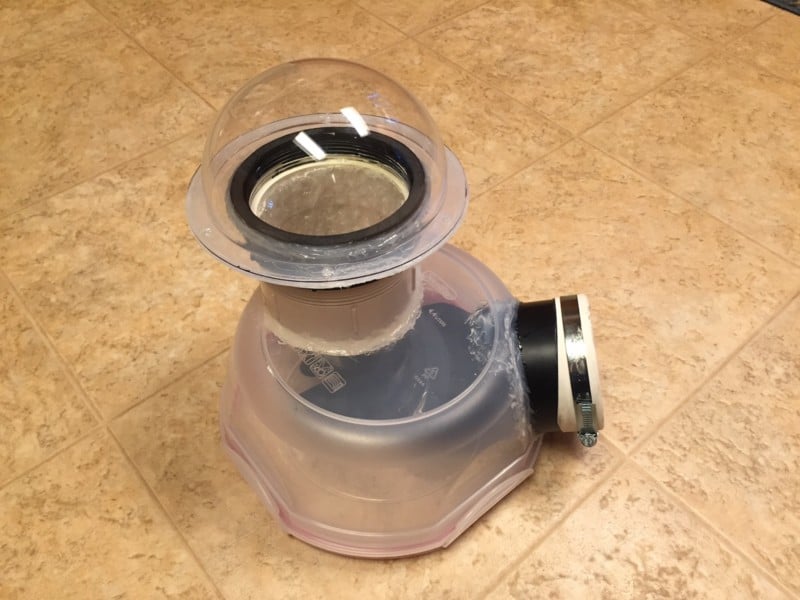 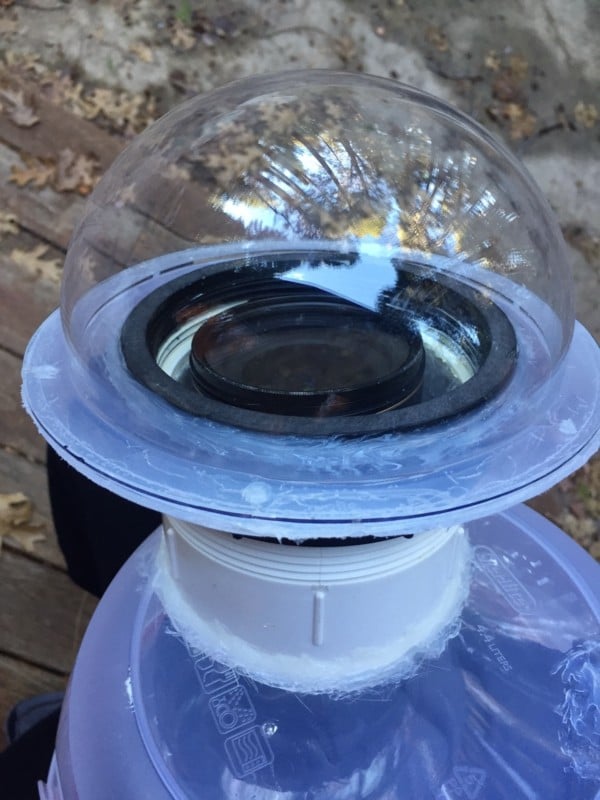 Here are a few images from shoots to show its results: 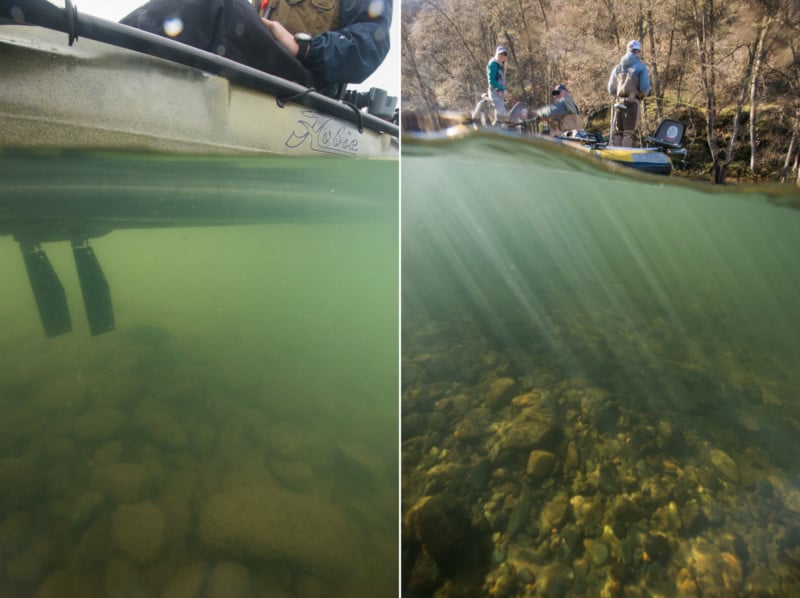 If you have any comments, thoughts, improvements, corrections, etc., I’d love to hear them.

About the author: David Wahlman is a full-time outdoor and active lifestyle photographer based in Los Angeles, CA. You can find more of his work and words on his website and blog, or by following him on Facebook and Instagram. This post was also published here.