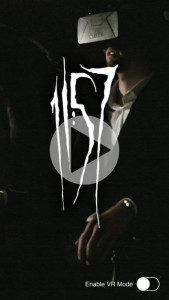 The first of it’s kind VR horror experience 11:57 pits the viewer in a haunted basement where horror and suspense presents itself in a 360° nightmare.

The short horror film was released in October 2014 for the Oculus Rift. It quickly caught traction around the world among fans of Virtual Reality. Since then there has been a high demand for an iOS version.

Now just in time for Halloween 11:57 is availble for iOS! Scare your friend with this stunning horror movie.

As the first of its kind, 11:57 sets out to offer a 360-degree nightmare by making the spectator the main character of the film. This means that rather than just watching the film, you become part of the actual set making the action revolve around you. We highly recommended to use headphones to enjoy the binaural audio.

Audio was produced and provided by Audentity. This mobile VR app is built & powered by Wemersive Inc.